WOULD YOU DARE TO COMPETE WITH THE MOST FEARSOME VOLCANOES ON EARTH?

Volcanos have been and will continue to be one of the mightiest symbols of the power of the Earth. They are vicious and incontrollable power of the Mother Nature. What better way to challenge yourself? Try and concur our new challenge.

In the birth of the planet Earth the entire surface was covered with volcanoes. Their activity was among the first events that continued for centuries and changed the face of the Earth. We all should follow that example of mighty power and activity and use it to change ourselves for better. That can be a great example we can follow. That’s why we designed a whole new series of special medals dedicated to one of the most powerful and challenging volcanoes in Earth’s history. Throughout the history there were many volcanic events that left their mark – literally and metaphorically. We chose the top 3 volcanoes that you can challenge against and prove yourself worthy of the might that they represent.

If you want to challenge yourself and exhibit the qualities of a volcano, participate in our virtual runs to test your abilities. Sign up for our Virtual runs now! Earn awesome medal, personal certificate, ranking,  fellow runners social community.

Krakatoa is perhaps the most famous volcano. It is located in islands in Indonesia and to this day remains as one of the most feared volcanoes on the Earth. Its explosive eruption in 1883 is considered to be one of the most catastrophic eruptions in history. This volcano is so famous that it has two Hollywood movies dedicated to it. What better destination for your next virtual run?

Here are some interesting facts about Krakatoa:

As we started speaking of miles – why don’t you join our volcanic event and create your own history with the sound of breaking your record for longest distant and earn our beautiful and feared Krakatoa medal? Run for your life. Challenge yourself now.

Scary, isn’t it? Why don’t you find out if you could escape the destroyer of worlds by outrunning it? Join our event and find out. Collect Krakatoa or it will collect you.

Do you have that nuclear power in you? Use it. Let it go (as Elsa from Frozen ones said). Feel the power of the ancient times by participating in our event. Run with the power inside you.

So you can see why we decided to include Krakatoa in our volcanic collection of medals created especially for you. Our medal represents the ancient power of the nature. Earn it. 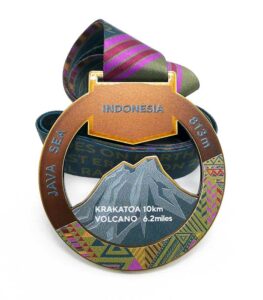 It’s considered that Vesuvius probably originated 200,000 years ago. Although a relatively young volcano, Vesuvius had been dormant for centuries before the great eruption of 79 CE that buried the cities of Pompeii, Oplontis, and Stabiae under ashes and lapilli and the city of Herculaneum under a mudflow. We don’t want to worry you but Mount Vesuvius is considered an active volcano. It very well could erupt again.

Here are some interesting facts about Vesuvius:

Can you win against this name changer? Go against the volcano and find out.

Use the power of Vesuvius and charge yourself with the energy needed for your run. Use it to motivate yourself.

If you really want to concur this giant, you can participate in our event and go against the Vesuvius itself. Earn the medal for the victory against him. 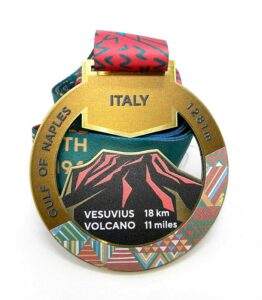 Cumbre Vieja is located near the heavens – Canary Islands, Spain. It seems that the mother nature decided to locate the hell near the heavens just for fun. What better place for our new virtual challenge? By looking at the volcano you wouldn’t say that it is over 125,000 years old. It still looks young : )

Here are some interesting facts about Cumbre Vieja:

Did you know that soundwaves are one of the fastest waves? They are mostly produces in the explosions. Can you challenge yourself against the explosion waves of Cumbre Vieja.

Here is one very small reason you should keep yourself in shape all the time. You never know when you will have to run for your life.

The ground beneath our feet always seems to shake when we run. Well in this case the shake is for real. This is a real danger, not your overworked muscles.

The medals we designed include special elements that are unique for each place where the volcanoes are – from the design of the volcanoes themselves down to the ribbon. We want to provide you with great experience when you sport. We hope you like it.

They can destroy lives but they also can create it. As volcanoes burn with that energy they create themselves, they become better, stronger, powerful. That’s why created those medals – to remind you that sport melts down your worst so that your best can be seen. Use that to challenge yourself and become a better version of yourself. Now run!

Here is how you can participate and win your medal in our Virtual Runs:

Runners are not always set up to run. Fact!!! If you join a community of runners on the social medias you will meet a bunch of people who love to run and share expert tips and would love to support you and motivate you.They have the exact problems like you and suffer during the run just like you. It’s not just you who are miserable :))

Subscribe for the shortest distance something like 5K and complete a virtual run. Complete the whole serie and make a beautiful collection to display on the wall and remember your achievements.

END_OF_DOCUMENT_TOKEN_TO_BE_REPLACED

Year of the Tiger Do’s & Don’ts

END_OF_DOCUMENT_TOKEN_TO_BE_REPLACED

Take part in this unique virtual runs inspired by the Peruvian lines of Nazca 3500 BCE Peru territory was inhabited by the oldest...

END_OF_DOCUMENT_TOKEN_TO_BE_REPLACED

From 2022 we are launching our new Program “Run Help Inspire”. We believe that sport is more than just a physical activity. In our team sport means dedication, support and unity. We support various charitable campaigns and causes related to environmental protection or helping people and children in need.

END_OF_DOCUMENT_TOKEN_TO_BE_REPLACED

CRYPTO RUN We challenge you to participate in our first Cryptocurrency Virtual Run with unique medal Complete this virtual run w...

END_OF_DOCUMENT_TOKEN_TO_BE_REPLACED

Mauritius is a tropical paradise...

END_OF_DOCUMENT_TOKEN_TO_BE_REPLACED

What is a virtual run? The marathons withstood the test of time and today thousands of people around the world are involved in su...